This remote tract of land, covering 4636 square kilometres, offers one of the finest wilderness experiences in Zambia, if not Africa itself. It is not open to the public and there are no permanent lodges there. Access is with one of the few safari operators granted permission to conduct walking safaris.

The beauty of visiting this Park is the truly remarkable opportunities to experience Africa as it was. It is wild and untouched and you are simply an unobtrusive witness to its natural beauty and drama.  Although declared a wilderness area, the North Park, was not open to anyone other than Game Department rangers for more than thirty years. In 1984, Major John Harvey and his wife Lorna sought permission to conduct walking safaris in the area and for many years were the only operators in this remote wilderness.

Then in 1989, two scientists, Mark and Delia Owens, famous for their book ‘Cry of the Kalahari’, were granted permission to set up a research station in the Park. Through their influence and as a means of helping to curb poaching in the area, the authorities allowed entry to a few more safari operators who bring limited numbers into the Park for guided walking safaris and game drives. Their efforts in the North Luangwa are documented in their book ‘Survivors Song / The Eye of the Elephant’. 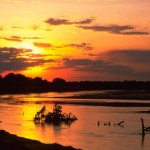 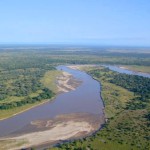 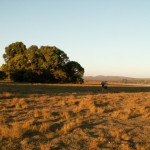 There are very few roads and you are unlikely to see anyone else for the duration of your trip. Like the South Park, it lies on the western bank of the Luangwa River bordered on the other side by the dramatic Muchinga Escarpment which rises over 1000 meters from the valley floor. Its hazy outline can clearly be seen from the Luangwa River.

There are a number of tributary rivers running through the Park and into the Luangwa  which play an important ecological role in the area. The crystal-clear Mwaleshi River trickles down the escarpment in a series of small waterfalls. It recedes in the dry season, leaving many pools along the way, drawing the animals from the bush to its banks in search of water. No game drives are permitted in the Mwaleshi area, and access is by organized walking safaris only.

Operators in this region conduct safaris in the dry season from June to October when animal sightings are at their peak. Access in the wet season is virtually impossible.

Although this park was officially opened to the public in 1984, the infrastructure in and to the Park is not sufficiently developed to cater for the independent traveller. Special permission to enter it must be obtained from the Dept of National Parks and Wildlife Services in Chilanga or Mpika. This is not advisable due to its remoteness should anything go wrong with your vehicle The best way to experience this park is with one of the operators running safaris here. One can fly in to either Mfuwe International Airport, about four hours away and be picked up, or be brought in from the Mpika side of the escarpment. There are two airstrips that are open for charter traffic. See Package Tours in the index for pre-arranged trips in Zambia including North Luangwa.

The Park is noted for its massive herds of buffalo, a spectacular sight if they’re seen on the run, kicking up dust for miles behind them. Large prides of lion inhabit the territory and it is not uncommon to witness a kill. Other common mammals are hyaena, Cookson’s wildebeest, bushbuck, zebra, warthog, baboon, vervet monkey, puku and impala. Elephant and leopard are also seen, but not as frequently as in the South Park. You are more likely to see hartebeest, reedbuck and eland here, however. All the birds in the South have been recorded here as well. Sighted regularly are the crowned cranes, purple crested loeries, broad billed roller, Lilian’s lovebird, the carmine bee-eater, giant eagle owl and Pel’s fishing owl. Occasionally seen are the bathawk, black coucal and osprey. An Update on the Kafue National Park Priority Support Plan

Image by Frank Weitzer "The future's brighter for Kafue!" says Libby, the owner of Kasabushi Camp, as she and her husband Andy continue to welcome guests to their home in this enchanted, undiscovered part of Zambia. Since the [...]

Andrew Muswala of Travel and Leisure Zambia shares with us his most recent travel report, covering some of Zambia's most incredible spots & lodges in South Luangwa National Park Tafika Camp Sunset I have been privileged to begin my nine-day [...]

Luangwa Valley is home to Zambia’s largest lion population. It is recognized by National Geographic’s Big Cats initiative as one of 21 high priority lion conservation areas in Africa. Zambian Carnivore Programme (ZCP) is working with various partners to ensure [...]