When one looks out over Lake Bangweulu, the grey blue waters disappear into the horizon, blending in completely with the colour of the sky. It is difficult to tell just where the horizon is. ‘Bangweulu’ means ‘The Place Where the Water Meets the Sky.’

The Lake is exploited more as a fish source than for its tourist potential. This is unfortunate, as it’s beauty is breathtaking. There are rumours of developing a tourist resort and having a luxury cruise boat for hire. But for the moment this is a an interesting stopover for the intrepid vehicle traveller or backpacker.

The main catches in the Lake are Cychlids (bream, tigerfish, yellow belly) and catfish. About 57 000 metric tons of fish are harvested from the Lake each year. Although fish stocks are not in danger, catches are declining and the favoured species are becoming thinner.

The fisheries of the Bangweulu are one of the largest in Zambia. This has lead to some of the highest population densities around the Lake where commercial fishermen have settled. Nevertheless the fishing industry is not economically well developed and inadequate controls and marketing facilities threaten both sustainability and profitability of the industry as a whole. Many of the fishermen trade their catches purely on a barter system for essential commodities.

Samfya is the largest town on the Lake, developed in the mid 1900s as a fishing village. You can get basic supplies as well as fresh fish. There is a post office, clinic and adequate fuel supplies. 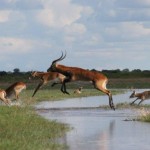 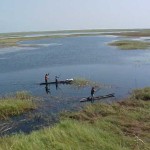 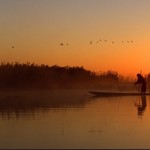 The Great Bangweulu Basin, incorporating the vast Bangweulu Lake and a massive Wetland area, lies in a shallow depression in the centre of an ancient cratonic platform, the North Zambian Plateau. The basin is fed by 17 principle rivers from a catchment area of 190 000 kms2, but is drained by only one river, the Luapula.

The area floods in the wet season between November and March, and receives an average annual rainfall of about 1200mm, but 90% of the water entering the system is lost to evapo-transpiration. The resultant effect is that the water level in the centre of the basin varies between one and two meters, causing the floodline to advance and retreat by as much as 45 kilometres at the periphery. It is this seasonal rising and falling of the flood waters that dictates life in the swamps.

Man has inhabited the periphery of the swamp area for hundreds of years as it has always provided a rich source of food, but the area is so incredibly vast, it is largely left to the abundant wildlife that live off the rich resources.

The current inhabitants of the Northern Province are descendants from a series of emigrations from the Congo Basin. The earliest settlers were known as the Ba-twa or Wild Men by the more recent arrivals. Formerly they occupied the islands around the confluence of the Chambesi with the Luapula Rivers and lived by fishing and hunting from temporary shelters. Today they have become assimilated into the surrounding tribes building permanent villages and speaking the same Bemba language.