Sioma Ngwezi National Park is mainly covered by Kalahari woodland. It is the third largest Park in Zambia covering a total area of more than 5000 km2. The Park has been heavily poached, but the situation is improving and wildlife is recovering. As an example elephants are returning to the Park, seen at the southeast border where elephants have re-established an old migration route, now very visible with several tracks in a corridor extending over more than one kilometer. In the Park most wild game associated with the African bush may be encountered although up to now in fairly low numbers. According to wildlife scouts from the Zambian Wildlife Authority (ZAWA) the Park holds a huge variety of game species such as elephant, lion, leopard, hyena, cheetah, wild dog, giraffe, eland, sable, roan, tsessebe, zebra, impala, kudu, duiker, buffalo, hippo, crocodile and sitatunga as well as a great number of birds. 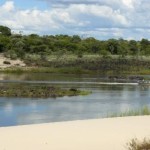 Game drives, game walks and bird watching excursions are offered from Sioma Camp. Tiger fishing in the Zambezi River presents a challenge for sport anglers from all over the world. The main natural attraction in the area is the Sioma (or Ngonye) Falls. The Falls, although not nearly as spectacular as Victoria Falls, do however impress visitors as they are quite extensive. In the dry season you can get up close and even take a swim in one of the rock pools. The local people belong to the Lozi tribe who are ruled by the Barotse Royal Establishment, representing one of the richest cultures in Zambia. This also expands into neighbouring countries.

The Park is home to over 3000 elephants, and several endangered species including roan, sable, wild dog and cheetah. Several antelope species are present, but quite shy. Mostly puku, impala, roan, sable, zebra and kudu are seen. Fishing in the Zambezi River is always good. Not far from the Park are the beautiful Sioma Falls.