This vast inland sea was first made known to the European world in the mid 1800’s by the English explorers Richard Burton and John Speke. They pursued it as the source of the Nile, arriving at its shores in February of 1858, only to discover that the Ruzizi River in the north, which they thought to be the Nile, flowed into and not out of the lake. (Their incredible journey is documented in the movie ‘Mountains of the Moon’.)

Tanganyika’s waters lap Tanzania, Burundi, Congo DR and Zambia. It is the longest fresh water lake in the world and the second deepest after lake Baikal in Russia. The immense depth is because it lies in the Great Rift Valley, which also has created its steep shoreline. It reaches a depth of 1433 metres (4 700 feet), which is an astounding 642m below sea level.

Although Zambia can only lay claim to 7% of its surface area, it stretches north to south a distance of 677 kilometres (420 miles) and averages about fifty kilometers wide (31 miles). The clear waters host more than 350 different species of fish and is well known for aquarium fish exports and excellent angling.

The fertile circulating surface water, although not tidal, provides abundant plankton for its inhabitants which in turn provides much needed protein for both the local and export markets. The stiff winds that blow off the surrounding mountains aid the continual movement which inhibits the spread of bilharzia, the parasitic disease carried by shallow water snails. 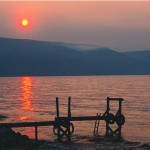 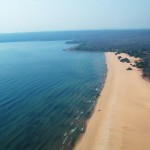 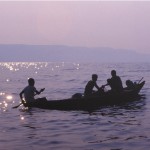 Despite the ferocious surface storms that occur, driving waves up to six meters high (20 foot), no mixing of the lower relict waters occur. The bottom 1 200 meters of the lake remain ‘dead’ – either too high in hydrogen sulphide or too low in oxygen to support life. This ‘fossil water’ may be as old as 20 million years. By contrast, the oceans, because of currents and upwellings have life forms even as low as 11000 meters (36 080 feet).

Lake Tanganyika has a remarkably uniform temperature. The lower regions are only a mere 3° C colder than the surface. The reason for this strange phenomenon has yet to be discovered.

Lake Tanganyika boasts over 350 species of fish of which most are endemic. Like Lake Malawi, Lake Tanganyika is extremely old, and the combination of its age and ecological isolation has led to the evolution of unique fish populations. Since new species are being discovered continually in these remarkable lakes, it is difficult to determine which has the highest diversity, but they at least share the distinction of being the top two lakes in the world in terms of biodiversity, whilst Lake Tanganyika has the highest proportion of endemicity, concentrated mainly in the Zambian waters of the lake.

The Lake Tanganyika Biodiversity Project has been set up to ensure that its biological diversity is maintained. The aim of the project is to produce an effective and sustainable system for managing and conserving the biodiversity of Lake Tanganyika. As Lake Tanganyika is a border for four countries Zambia, Burundi, Democratic Republic of Congo- the success of the project will depend on how well these countries work together. The project which began in 1995 comes to an end in the year 2000 and is funded by the Global Environmental Facility through United Nations Development Programme (UNDP).

Species of particular note include the Giant Nile Perch (Lates angustifrons) and Small Nile Perch (Luciolates stappersii) which are important commercial and sports fishing (that is angling) species, Goliath Tiger (Hydrocynus goliath) and the English Fish or Lake Tanganyika yellow-belly (Boulengerochromis microlepis) which are important angling species (the latter being especially prized for its good eating), the Kapenta (Limnothrissa miodon) which is an important source of fish-protein in Zambia, the rare Bichir (Polypterus congicus), and a great variety of endemic Cichlids.

Regarded as one of the most biologically unique habitats on earth, Lake Tanganyika is also an evolutionary showcase due to its great age and stability. Ninety eight percent of the lake’s cychlids (which comprise two thirds of all the lake’s fish) are unique to Tanganyika. Also endemic are all seven of its crabs, five out of the thirteen bivalve molluscs, more than half of its gastropod molluscs and eleven of its thirty three copepod crustaceans.

Sport fishing is very popular here and catches include the goliath tigerfish and Nile perch. Crocodiles inhabit most of the shoreline, except around Mpulungu, probably due to the noise of people and motorboats. Swimming in the lake (in the Mpulungu area only!) is an absolute treat. Warm, clear, salt free water that changes from silky stillness, to high waves for a great body surf – usually with no apparent reason for the change. Storms from way up north probably cause the still waters in the south to agitate.