Leopard tries to put porcupine on the menu in South Luangwa

Recent Robin Pope Safari’s guest, Neil Andrews, tells of their incredible sighting on a game drive in South Luangwa National Park. It was one for the memory card and made for life-long safari memories too.

“Although Jane, Ian, Sarah and myself are regular RPS visitors, for all of us this was our first stay at Tena Tena.

With our guide Julius, we were planning the schedule for our trip out to the salt pan – deciding on a ‘normal’ (6am) start taking a picnic was preferable to a 05.00 start and a cooked breakfast en route.

Barely 15 minutes from camp we were witnesses to one of those safari moments that you read about, and that always makes you want to come back for more.

There in front of us was a most handsome yet hungry mature male leopard. He was sizing up his breakfast … porcupine! 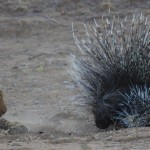 Actually, it was ‘porcupines’ in the plural … THREE, which we did not at first realise, as the third was about an eighth of the size of its parents. A little quill ball perfect in every way apart from the fact that a hungry leopard thought it would make an ideal snack.

The leopard’s attempts to separate the youngster from its mother’s side were rebuffed initially solely by the mother as the adult male porcupine had by now distanced itself from the fray.

Bravely the mother porcupine sheltered her offspring by her side inhibiting the leopard’s paw sashays to find their mark, moving every which way. Eventually her bravery was rewarded twofold, by her mate returning to her assistance. The leopard’s frustration allowed them enough time to scuttle off, with their youngster sandwiched between them, to the relative safety of thick undergrowth.

Over a hundred elephants (and twelve hours) later, plus many other great sightings in between, we found the disconsolate leopard virtually where we had left it, now waiting for night to fall before it went hunting for its next meal – no doubt hoping it would be less prickly!”