“If your dreams don’t scare you they aren’t big enough”.  We have reminded ourselves of these words so many times over the last five years or so since we began our journey to open a Bush Camp in Zambia.

Rather than investing in one of the established and developed National Parks we wanted to find a lesser known area that needed to be brought to the attention of the discerning traveller.  Zambia’s Wildlife Authority had already embarked upon a visionary programme to restore the Kafue National Park as a secure repository of biodiversity with global significance as well as a world-renowned tourist destination.  We had found the place to start searching for our dream.

We already knew the KNP from previous trips there but only the northern and southern sectors were accessible to tourists at that time.  But, it was the central sector of the park that captured our imagination because it had been, to a large extent, inaccessible to tourists for many years.  Due to the degradation of the Spinal Road that ran through the park there was no permanent human presence and poaching had taken its toll.  It cried out for active conservation to help restore it to its former glory of past decades.

In 2010 we explored the park and looked at various designated sites.  We knew of plans to re-grade the Spinal Road so we re-traced its route south, a slow journey through overgrown bush.  Andy finally found the perfect location for our camp using Google Earth.

We visited our potential site in February 2011 by boat, in the height of the rainy season, and immediately fell in love with it.  The interesting stretch of Kafue River, palm-covered islands and stunning views were all too wonderful to keep to ourselves. 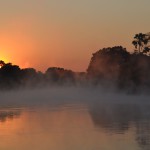 So, we began the long journey to secure our site and attain the permission to build our camp.  During the wait the Spinal Road re-opened in 2012  – perfect timing, our hopes had been fulfilled.

We chose to build in a designated Wild Zone; an undisturbed environment of natural resources, particularly wildlife.  Such areas are regulated to minimise adverse impact due to human activities.  The wildlife resource for the KNP includes 158 species of mammal, more antelope species than any other park in Africa and is listed as one of Zambia’s “Important Bird Areas” by the Zambian Ornithological Society.  We were now in a position to support this protection with our presence.

After a lot of blood, sweat and tears we opened Kasabushi Campsite at Easter 2014.  The opportunity to camp within this protected zone of the park has been welcomed by so many nature lovers.  The pristine bush and lack of development has been enjoyed by wonderful people from all over the world wanting to experience the real Africa.  Having the park pretty much to themselves due to the lack of people and other vehicles is something that visitors to the Central KNP really appreciate.  The park is as much about what it doesn’t have as what is there to be enjoyed.

It has taken us a further two years to design and build our Bush Camp. The final part of our building project is well on its way to completion.  Kasabushi Camp opens to guests in August this year.

The camp is the “Heart of the Kafue” due to the labour of love that has gone into creating it as well as its central location within the park.  It’s also our home in the bush and we are looking forward to enjoying it with our first full-board guests in the coming months.

Our presence in the park has already encouraged an increased wildlife population in the last three years.  Antelope are beginning to feel at home around the camp and our resident laughing hippos are our constant neighbours.  Predator numbers are consequently increasing and we are enjoying regular sightings of Wild Dog, Leopard and Lion.  The Central Kafue has an abundance of wildlife and the harder you look the luckier you get.

The Central Kafue is definitely back on the safari map and just waiting to be discovered.  Our journey is far from over.  We will continue to help protect the area whilst encouraging bush lovers to visit and enjoy what we have loved from the moment we first set our eyes on it.