From London to the Luangwa Valley

From the moment I landed at Mfuwe airport back on holiday in 2012, I knew this was a special place. Having never stepped foot in Africa before, jumping in the open game viewer, enjoying the sights and sounds of the villages en route to the Park was a dream come true. We hadn’t even got inside the National Park boundary (the South Luangwa is unfenced with the Luangwa River being it’s natural eastern boarder) before I saw my first animal – a giraffe! Countless hippos, elephants, zebra, leopard and lion made the next three days one of my best ever holidays. I knew I would be back! 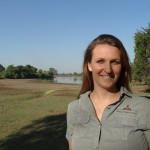 Two years later, the stars aligned, I packed my bags and found myself living the dream at Kapani at NCS headquarters in the Marketing and Reservation Team. Commutes changed from a 45 minute battle on London roads and tubes to a 30 second walk past bushbuck and the occasional elephant.

I arrived with our Assistant Bush Camp Managers so spent the next 2 weeks learning the ropes and understanding behind the scenes. Though I had done vehicle maintenance in the UK, I remember realising how different my world now was when I was told to check for lions in the area before changing a tyre! When it came to off road driving, I was no longer having to stop at a zebra crossings… I had to stop because there were zebras crossing.

Then it was understanding the experience. How can I confidently tell someone how amazing the Return to the Wild Sleepout is without having done it myself? And it truly is – I felt like I was the last person in the world as I curled up in my bed under the beautiful African stars – listening to the hyena calls and the lion roars in the background. I’m so often asked which is the best season to come on safari – and I can hand on heart say that I don’t know! Each month is special for very different reasons – March is stunning with green bush and beautiful sunsets (not to mention a park empty of homo sapiens but still full of game!). October is hot, dry and the red dusty earth is exactly as you picture safari on TV. And December and Christmas is nothing other than special out here….

I now know what it means to truly love your job. There really is nothing better than helping put together the best possible itinerary for someone and then meeting them face to face when they are out here. Having a chat over tea and cake, a nightcap around the campfire and swapping stories. It’s a tough life when you’ve got to drive out to a bushcamp and enjoy the animals on the way….. even if there is always the fear of getting lost…. I will never ever work out which tree the team is referring to turn left at on the way to Nsolo…. there are so many!

No day is boring out here, the whole team will leave the computers to watch an elephant walking past the office or bathing down at the Kapani deck. Hearing on the radio what sightings have happened over the last 24 hours from bushcamps, and of course meeting people from all over the world – seasoned safari goers and first timers – I know I’ve been truly spoilt by starting my safari life here in Zambia – it really does feel like the last wilderness…and now home.