It’s not every day that you get to witness a lion kill from start to finish, but a few lucky guests at Robin Pope Safari’s Nsefu Camp were able to do just that!

With every game drive, there comes the giddy possibility that you might just witness something spectacular. While everything in the bush is worth appreciating, be it a bird or a buffalo, it’s hard to deny the thrill of being present when there’s action unfolding.

Regular guests at Robin Pope Safaris, Richard and Mary Chaplin had been staying at Nsefu for just over a week and had already been treated to some fantastic sightings. However, ‘Lady Luck’ had her safari hat on and had something special in store for them. While out on a game drive, they were fortunate enough to watch as two lionesses attempted to take down a fully-grown buffalo. 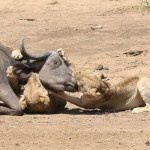 This in itself is quite a brilliant sighting as buffalo are notoriously aggressive and don’t go down without a fight. In true buffalo fashion, the herd came to the aid of their fallen comrade and turned on the lions. They temporarily managed to chase them off but soon the lionesses were back to finish the job and more lions arrived to join in on the feast. Talk about an emotional rollercoaster of a sighting!

Here in South Luangwa, we’re no strangers to brilliant sightings like this one. After all, the area didn’t get a reputation for being one of the finest wildlife sanctuaries in Africa for no reason. Whether it be a huge herd of elephants crossing the Luangwa River, or a pack of wild dogs playing; there is always something exciting for our guests to be a part of. That is the magic of this place.