The Zambezi River is the fourth largest river in Africa and is home to one of the continent’s most sought-after fresh water game fish, the Tiger Fish (Hydrocynus Vittatus). Sometimes called the “striped water dog,” the Tiger Fish is an extremely aggressive predator that feeds on baitfish. This species, which prefers warm well-oxygenated fast waters, is a top target for most anglers, particularly fly fishermen, as it is one of the fastest fresh water game fish in Africa. Trying to lure the fierce-fighting Tiger Fish, which puts on a dramatic display of acrobatics upon capture, is the ultimate challenge. 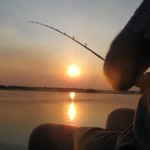 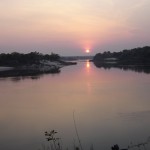 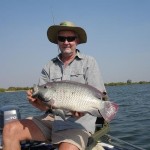 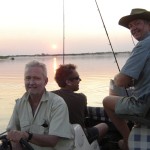 The most notable feature of the Upper Zambezi is the Barotse Floodplain, which provides a thriving ecosystem for all aquatic life in this section of the river. The floodplain prevents any form of permanent settlement in the area, which keeps the ecosystem free of pollution, over-fishing, and commercialisation. However, it is important to time your trip carefully as the likelihood of catching a Tiger Fish changes with the seasons. 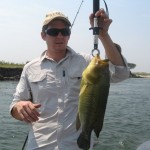 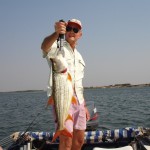 The Lower Zambezi, with its majestic views of the Zambezi escarpment, is another targeted destination for fishermen intent on pitting their wits against the combative Tiger Fish. This section of the river, which is located in the south-eastern part of Zambia, flows alongside the pristine 4100 km² Lower Zambezi National Park. The park is a new tourism destination and there are strict regulations governing the number of boats that are allowed to be on the section of the river within the national park. The Lower Zambezi National Park provides the perfect opportunity to combine fishing with a safari experience. While fishing within the park’s borders is generally better as the fish are protected from netting and over-fishing, fishing outside the park is still good, albeit less exclusive.

There are a number of acclaimed professional fishing lodges on the banks of both the upper and lower sections of the river. These lodges provide a range of fishing activities for the novice angler to the professional fly fisherman. It is best to contact a specialist tour operator who will be able to give you advice based on when you plan to take your trip and help with the logistics of getting to and from the lodges.