August 2013 – Toka Leya, an intimate 12-tented camp overlooking the Zambezi River, donated 1 000 trees from its nursery to Greenpop for a three-week reforestation project in Livingstone, Zambia, that took place from 7-28 July 2013.

“We were thrilled to support Greenpop’s second Trees for Zambia Action Event by donating 1 000 trees from our nursery to plant at various locations in and around Livingstone. We have numerous systems in place that aim to rehabilitate indigenous flora in the area and are always interested in working together with like-minded people who are interested in affecting sustainable change”, said Pete Guwa, Toka Leya General Manager.

The Trees for Zambia reforestation project also aims to raise awareness about climate change, environmental sustainability and alternative energy sources. Over the three weeks, 3 358 indigenous trees were planted at six different schools, on subsistence farms and in reforestation sites. 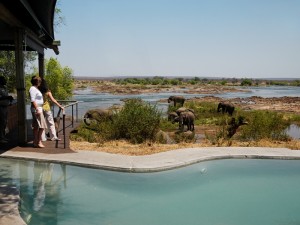 Toka Leya is committed to changing this and supports various projects in line with Wilderness Safaris’ 4Cs philosophy (Commerce, Conservation, Community and Culture). Its greenhouse and nursery project is flourishing; seeds and pods are collected from the National Park, germinated and their shoots placed in the greenhouse to take root and grow. Once the trees have reached a certain height or age, they are re-potted and moved into the nursery. The camp also has a waste-water treatment plant and a worm farm to break down organic waste from the camp kitchen. The worms produce compost and nitrate-rich ‘worm juice’ which, mixed with water, becomes a highly nutritious fertiliser that is then utilised in the greenhouse to help the seedlings grow – and so the cycle begins once more. Click here  for more information.