In love with Liuwa Plains

Liuwa Plains National Park is a park in Barotseland in Western Zambia that is distinct from the rest of the country and holds allure for wildlife afficianodos from the world on account of its diversity and extraordinary landscapes.  Liuwa has been described as akin to the Okavango Delta and for me it is a wonderland for photographers looking for wide horizons and outstanding and unusual photographic opportunities. Its not just the species that you will see here, it is also the landscapes, the colours and the people living in this area that make it quite unique. Liuwa Plains is extraordinary – a landscape inundated with water for most of the year – and inhabited by lion, wild dog, cheetah, eland, hyena (some of the largest I have seen anywhere) and the second largest wildebeest migration on earth. It easily compares to the best wilderness areas in Africa and has a story to tell that is as wide and wonderful as its landscapes.

When to go to Liuwa and Barotseland

My trips to Liuwa typically take place in May (at the end of the flood) or in November (at the start of the flood) as these two times of year tend to produce the most extraordinary game viewing in Liuwa. It’s hard to say which is best. The birds and flowers that cover the exposed pools are extraordinary in May and in November the migration is in full swing, the clouds are grey and brooding and yellow flowers burst forth on the plains. I have seen great game at both times of year and if its birding you are interested in then May is possibly the best time. Others time their trips for the annual Kuomboka Ceremony. At the end of the rainy season when the water rises to high to live on the plains, the Litunga, or King of Barotseland announces the start of  the Kuomboka (the getting out of water). A much awaited ceremony is held when the king leaves the flooded plains for his highland home in a procession of two giant barges paddled by more than 100 men and to the beat of dozens more drummers is a ceremony that attracts photographers from around the world. 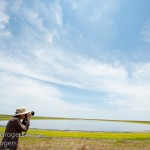 Liuwa is a 3660 km square wilderness that is bounded by the Luambimba and Luanginga Rivers and consists of a grassy plain with numerous pans. It is on the Zambezi floodplain – a vast network of rivers and swamplands – in the eastern part of Zambia called Barotseland. In the rainy season waters from Angola cover the plain and the rivers swell turning it into a green and blue tapestry of water stretches more than 40 kilometres wide. In some ways it is a giant sponge that holds and releases waters that eventually make their way to the Okavango Delta and the Zambezi River. 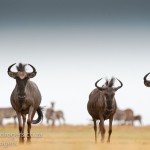 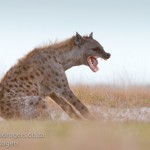 How to get to Liuwa

Like most great places, it’s a long way to Liuwa. But such is its allure that it cannot be resisted. I once drove there from Livingstone (a long two-day drive), on another fantastic occasion I flew in with my friend Ben Parker in a microlight. More recently, I’ve been going in style with Robin Pope Safaris in a caravan charter from Lusaka followed by an exciting three-hour game drive across some of the wildest country you can imagine. Currently this is the best way to get there although there are plans to introduce a helicopter service and a luxury lodge sometime in the future. It’s a grand plan and may or may not happen in 2014.

The culture of Barotseland

For me much of the allure of Liuwa lies outside the park. In Kalabo the flat-bottomed boats used by the Lozi to move through this watery wonderland are an awesome spectacle. There are also fascinating scenes in the fishing harbor at Mongu. For anyone interested in cultural activities of the Barotseland area these places should not be missed. Liuwa became a national park in 1972, but is actually one of the oldest conservation areas in Africa having been set aside for conservation by the Litunga in the early 1880s.  Ironically, it experienced its darkest times as a national park in the 1990s, when much of the game was wiped out.  In 2003, Dutch NGO called African Parks created a partnership with, the Zambia Wildlife Authority (ZAWA) and the Barotse Royal Establishment. Since then scientific research, tourism, patrols and other controls has instilled an extraordinary recovery.  The numbers of wildebeest have swelled from 15 000 animals to more than 50 000 and zebra have gone from 2800 to 4500. Numbers of red lechwe, tsessebe, wild dogs cheetah and hyena are also on the rise African Parks also restocked eland, buffalo and lion which had become virtually extinct.

The story of Lady Liuwa

The story of lions in this park was told by National Geographic in 2010 with the screening of Lady Liuwa named after the single lioness that was in the park. Out of loneliness Lady Liuwa developed a very close relationship with the cameraman who came to film the documentary and the poignant story played a strong role in bringing the park to the world’s attention. When African Parks introduced two impressive black-maned males to the park from nearby Kafue National Park everyone waited for her to fall pregnant. They mated often but she was too old to conceive and eventually the lions moved north Angola where one was shot. Two additional females were since reintroduced, and in January 2014, the good news emerged that one of these females (Lady Liuwa’s protégée) had cubs. The second greatest migration on earth

At the start of every dry season, thousands of blue wildebeest gather en masse in the north west of the plains and slowly graze their way southwards following the numerous pans and nutritious forage it offers. Here they await the onset of the rains, a display no less spectacular. November is supposedly the best time to see the migration but I have seen bigger concentrations of animals in May, so I guess that it works for either time. Birds, insects and vegetation of Liuwa

The landscape at Liuwa is inundated with water for much of the year. There are small islands of raffia palms to break the horizon and for the rest the plains are flat. But there is much more to it than that of course. Robin explained, when driving through the plains of Liuwa, you are actually driving over trees. Frequent flooding has created a stunted form of plants called suffrotex. These plants exist mostly beneath the surface and only their leaves are visible. Some 334 bird species that occur and they include vast flocks of stork and cranes (Liuwa is considered to be the fourth most important breeding site for wattled cranes) as well as  black-winged pratincole that arrive here in their tens of thousands. At the waterholes slaty egret, whiskered tern and other migrants can also be seen. The eastern clapper lark and the pink-billed lark each their northern limit here with both these subspecies considered to be endemic to Liuwa. Where to stay in Liuwa

For several years Robin Pope has had the concession in Liuwa National Park and host groups during May and June and October and November. While they use the same camp called Matamanene Camp, is on a prime forested island in the park. It is is owned by African Parks and quite basic in nature but Robin Pope Safaris provides all their excellent guides and softs. It’s a wonderful experience staying here. It is the same place where National Geographic stayed during their filming and quite often I have seen Lady Liuwa skirting round the edge of the fire as she did when they were here. For the intrepid self-drive 4×4 enthusiast, Liuwa can be accessed during the dry season between 01 June and 15 December. Self-drive visitors to Liuwa can stay at one of four community camp sites established in the park:

These camps feature well maintained sites, cold showers and flush toilets (not including Sikale). Camp attendants based at the camps will attend to your needs. To make a booking for one of the community camp sites, please complete a booking request form. For more information on this accommodation option, please contact Charity on [email protected]

Norman Carr safaris has announced plans to build a luxury lodge in the park with a helicopter service but the date for this has not yet been announced.