The afternoon game drive started out like most in the Kafue, with the hope and expectation of something interesting and unusual ahead, heightened by the incessant alarm calls of the baboon troop along the river.

It was still light when we set off, in the direction of the alarm calls, it didn’t take us long to find a wonderful lone cheetah resting up in the shade of a tree. Cheetah are a really special animal for us in Zambia, the remaining populations are restricted to the Kafue, Liuwa Plains and potentially Sioma Ngwezi, where they are certainly the rarest and potentially most genetically isolated populations in Southern Africa.

From this wonderful start we headed off to find a spot to watch the sun setting over the broad and peaceful Kafue River. With the setting sun came hope for what lay ahead for the second part of our drive, the spotter readied his spotlight and we headed off, hoping to glimpse one of the many leopard that inhabit the riverine forests of the Kafue.

We rounded a bend in the road, the spotlight now stationary on a small red pair of eyes in some leaf litter, the guide lifted his binoculars as we all sat in silent suspense waiting for the verdict on what had been found.

The guide took an unusually long amount of time to decipher what he was seeing, he then asked us to help him identify what we were looking at, he quickly became very excited and asked firmly (but nicely!) for ‘someone, anyone, please take a photo!’. One of the guests in the vehicle, Gill, had her camera at the ready and snapped away at the dark spot which was beginning to show itself to us. 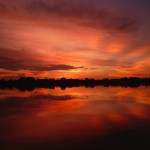 To our, and evidently the guide’s, astonishment it was a black genet! The guide explained that it is difficult enough to spot a ‘normal’ genet at night, let alone for it to be Melanistic (the scientific term for an excess of the black pigment Melanin), and what we were witnessing was a once in a lifetime sighting.

The guide went on to explain that Melanistic forms of other species, including leopard and serval for example, have been seen in other areas of Africa before, however they are most commonly restricted to more mountainous or ‘valley’ ecosystems.

In such areas it may actually be advantageous to be black and importantly where a smaller or closed population gene pool would mean that the rare genes would likely be expressed more readily than in an open population where migration in and out would happen and genetic diversity would likely be greater.

Bearing in mind that the Kafue is the largest park in Zambia and one of the five largest in the world, one can’t begin to think about the odds or chances of encountering this individual. Then again, the Kafue National Park has a tendency to throw up once in a lifetime sightings. The park is a place of wonder where very few people visit, but those who do will all but have it to themselves, just like these guests, who didn’t see another soul for our entire trip…

The genet was sighted by guests at Jeffery & McKeith Safaris, Musekese Camp.

For all enquiries please contact them by email on: [email protected], or through their website at: www.jefferymckeith.com or call them on: +260 976 215426