Lake Tanganyika is an astounding natural wonder, holding 15% of the Earth’s available freshwater and stretching over 600kms up the center of Africa from Zambia to Burundi. But it is the life that has evolved here over the past 10 million years or so that really stands apart from anywhere else on the planet.

Thousands of unique species survive in Lake Tanganyika having evolved independently over the eons in isolation and into incredible arrays. But it is the divergence of a group of fish known as Cichlids ( Cichlidae ) that truly stand apart from life anywhere else. Often called an inland sea, these group of fish are surprisingly reminiscent of tropical fish found on the reefs of the world’s oceans, despite Tanganyika never having been connected to the ocean. At somewhere around 250 species (and counting), the cichlids of Tanganyika are remarkable in their diversity, complexity of behavior, colour and breeding habits. Almost all are found nowhere else. 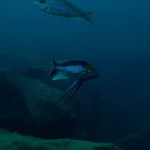 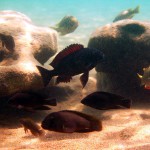 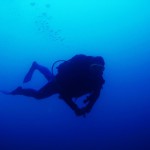 Cichlids of all shapes, sizes and colours!

The largest cichlid in the world is the aptly named emperor cichlid (Boulengerochromis microlepis), a stunning fish that has adapted to almost all habitats in the lake. Adult emperors pair up at breeding time and remain with their eggs and then free swimming fry for up to months, their entire being concentrated on ensuring the safety and maximum survival of their offspring. The male and female will take turns guarding their young, aggressively chasing off any threat and in the process taking on breathtaking hues of blues and golds to signify their status. In comparison nearly all species of ocean dwelling fish spawn millions of eggs and sperm into the water column and let nature take its course, no parental care being given whatsoever. Parent emperors on the other hand have been suspected of guarding their young so diligently that they themselves become emaciated and possibly never recover.

Living its entire life in the vicinity of empty snail shells that make their homes, the tiny zebra shell fish ( Neolamprologus multifaciatus) is amongst the smallest of the Tanganyika cichlids, growing to no more than 5cm in length, these tiny fish live in huge colonies of empty shell beds in their thousands, the young fry moving freely between different shells , tolerated by all fish in the colony in an enviably community lifestyle.

In between the giant emperor and minute shellfish are species that build elaborate sand castles to mark their territory, others live in the gloomy depths of the lake and are rarely seen alive; and still more live entirely on the scales of other fish they manage to feed off. Some cichlids take care of their young by guarding a patch of rock or sand, while the famous mouth brooders keep their young safely in their mouth cavities at the first sign of danger, the fry instinctively approaching their parent’s mouth at any approach. There are even cichlid species that mimic the colour and behavior of other species in order to get close to parents with young and then predate on those young fish. All are uniquely adapted to the harsh habitat that Tanganyika presents and utilise every available ecological niche in the lake. 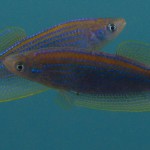 The changing levels of the lake through the millennia and the patchwork of habitats have led to an explosion of evolution among cichlids that are so unique and diverse in all their characteristics that Tanganyika has become an icon in the world of evolutionary studies and is considered the best place to see “evolution in action”. Most famously, Cichlids from the Tropheus genus are some of the best examples of new species being “born”. Separated by as little as a sandy beach or river mouth which the rock dwelling fish will not cross, communities that once lived together are now diverging in colour, mouth structure and in a few thousand years will become completely separate species in the blink of evolutionary time.

However, a short snorkel in some of the cleanest fresh water in Africa surrounded by thousands of individual fish in all shapes, sizes and colours is something that any person can appreciate, the array of life in Tanganyika truly rivals the corals reefs and rainforests of the world and is all the more special for its surrounding landscapes and cultures.