The tallest animal in the world, with a long neck, long legs and a long sloping back. They are gregarious mammals and move in herds of up to 20.

Ancient cultures in Africa revered the giraffe, as some modern cultures do today, and commonly depicted it in prehistoric rock and cave paintings. Unknown outside of Africa, this animal so excited man’s curiosity that it was sometimes sent as a diplomatic gift to other countries; one of the earliest records tells of a giraffe going from “Melinda” (presumably Malindi) in Kenya to China in 1415.

The giraffe (as well as its short-necked relative the okapi from Central African forests) has a distinctive walking gait, moving both legs on one side forward at the same time. At a gallop, however, the gait changes, and the giraffe simultaneously swings the hind legs ahead of and outside the front legs, reaching speeds of 35 miles an hour. Its heavy head moves forward with each powerful stride, then swings back to stay balanced.

They browse on a great variety of trees using their prehensile upper lip and long tongue to grasp the vegetation. Their average height is over four and a half meters and they often weigh over 1200kg. 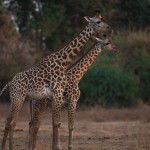 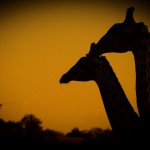 They breed at any time but usually at the end of the rains having a gestation period of 15 months and only one offspring per birth.

Giraffes have a highly efficient blood circulation system. Their heart beat is 150 times/min as compared to an elephant at 25 times. This prevents dizziness when they move their heads up and down on average through 18 feet when drinking water.

Bulls fight one another by necking, testing their strength by pushing like human arm wrestlers. In Luangwa Valley there is an endemic subspecies called Thornicrofts Giraffe with slightly different markings.

Giraffe tails were highly prized by the ancient Egyptians, and still are in many African cultures. The desire for good-luck bracelets, fly whisks and thread for sewing or stringing beads have led people to kill the giraffe for its tail alone. Giraffes are easily killed and poaching (now more often for their meat and hide) continues today.