Three cheeky lion cubs as well as a cheetah have been making the refurbishment of Matamarene Camp in Liuwa Plains, a little tricky.

We’ve been watching Norman Carr Safaris over the last few months; Matamanene Camp has been given a facelift – we’ve seen new bathrooms being built, new floors going down, new beds, mattresses and linens going into the tents. But what really makes us happy is the brand new main area……particularly the sofas and cushions! 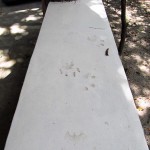 Before Matamanene reopened we only had a tree to nap under in the heat of the day…. we might be young lion cubs, only 18 months old, but we know what we like and that’s creature comforts! That sofa and those cushions are just too good to resist. Noeline, the operations manager, is having none of it! She and the team have stopped us stealing the sofa on more than one occasion (we got pretty close to taking it once, and sadly managed to rip it open. It wasn’t intentional, we were just so excited!). The good news is they couldn’t stop us stealing a couple of cushions.

This week we couldn’t resist the amazing smells coming from the kitchen. Norman Carr Safaris have brought in some of their best chefs from the Luangwa Valley and all day and all night we get whiffs of eggs being cooked on the camp fire, Thai beef salad being prepared, chickens being stuffed and lemon tart being served for pudding; it’s all just too tempting…..but we were shooed away by a vigilant watchman…..so we tried out the new carpet in the main area instead. We’ll occasionally hunt and play for the humans; we’re pretty good at sleeping too and when we’re bored we’ll pounce about camp when Mum (Sepo) and Aunty (Lady Liuwa) are napping. African Parks and the Zambian Carnivore Programme are doing such a great job protecting our home, if we aren’t in camp we like to roar at night to let everyone know we’re around, and this is our territory.