Last Week in the Luangwa Valley

You know you’ve hit the jackpot in life when your biggest issue getting to work is a herd of elephants blocking the road. Sure, life isn’t all sunsets and G&T’s when you’re running a safari lodge but it definitely does involve quite a few perks.

Emily from Robin Pope Safaris is one of those lucky few that get to enjoy the perks of bush life on a daily basis. It seems every day in the Luangwa valley holds new adventures and stories to be told and, lucky for us, Emily is an excellent story-teller!

Just last week she took a drive to visit Robin Pope Safari’s Nsefu lodge and has come back with the most wonderful tales from her trip. Prepare to be made madly jealous as she shares her wild stories from Luangwa…

“So where to start, well I guess we should work our way up the ladder from small to big so check out this rather funky looking caterpillar we spotted with those huge eyes staring out at us. I have however been corrected that whilst we don’t have an exact identification we suspect it was a hawk moth larvae.  He was rather strange and when I got closer a tongue was stuck out at me and it smelt slightly citrusy.”

After a curious meeting the caterpillar, Emily’s next sighting was quite a bit cuter. 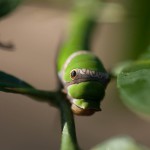 “We also had the joy of some very late piglets as they tore through the grass only just seeing above it trying their best to navigate the lumpy soil. Mum very kindly stopped to let them catch up before – oops – they overtook and then a couple of them just carried on going before realizing their mistake.  Stopped, looked around with a wide eyed type of panic before the rest of the team caught up and they were on their way.”

From there the sightings only got better…and quite a lot bigger!

“Giraffes were littering the more distant views but were rather tricky to see as to be honest with you most of them had their heads stuck into some rather thick bushes, and it wasn’t until they moved that you realized they were there.  That being said there were a few more lazy versions who had obviously enjoyed a lovely breakfast and were making the most of the slightly cooler morning shade before the midday temperatures made an impact.”

“The road into Tena was slightly blocked by a couple of large and muddy bull elephants who were determined to make the most of a particularly yummy bush.  As for Nsefu as we had a look around camp we were chatting to the staff that were there and they were telling us how at the beginning of the week they had watched lions killing a buffalo just up from the breakfast spot. All that was left for us to see were a few vultures picking at the scraps.  And then as if that weren’t epic enough two days later they had a pack of 21 wild dogs just nonchalantly trot through camp.”

All in a day’s work at Robin Pope Safaris. What a tough life when there is always something magical happening in Luangwa!