Most cat species live a fundamentally solitary existence, but the lion is an exception. It has developed a social system based on teamwork and a division of labor within the pride, and an extended but closed family unit centered around a group of related females.

The average pride consists of about 15 individuals, including five to 10 females with their young and two or three territorial males that are usually brothers or pride mates.

Lion are plentiful in the bigger National Parks but will often tend to stay in the remote parts for long periods at a time. They are the only cats moving in family groups and normally occupy a well defined territory.

In the southern part of South Luangwa the territories are quite small and the numbers in the groups quite large, some over twenty. Typically, two or more dominant males protect the territory against intruders. Several lionesses may produce cubs at one time and share the feeding. Eighty percent of the cubs will not survive to maturity for a number of reasons. Firstly, a new dominant male might kill off the cubs of the defeated male so ensuring the survival of his own offspring. Secondly lions are not the most efficient hunters and often go hungry, and when a kill is made, the adults generally eat first. If the cubs didn’t get enough to sustain them and another kill is not made soon enough, the cubs are the first to die.

Within the pride, the territorial males are the fathers of all the cubs. When a lioness is in heat, a male will join her, staying with her constantly. The pair usually mates for less than a minute, but it does so about every 15 to 30 minutes over a period of four to five days. Before maturity at four years, young males are evicted from the group to live a nomadic existence, unwanted in any other lion territory. Many don’t survive as they are not yet efficient hunters, and if one cannot fend for itself, it starves. 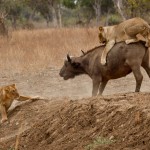 The lion is an ambush rather than a chase killer. With its heavy body it can only reach speeds of about 55 kilometres (35 miles) an hour, only in bursts and often much slower than the animals it pursues, so it requires much stealth and surprise to catch them. As a group, they will circle the animal, one will attack and knock it to the ground with a heavy blow, seize it by the throat or mouth and suffocate it. Although not as efficient at hunting as leopard or wild dog, their communal hunting methods ensure the survival of the group.

After some years the dominant males of the group are replaced by more powerful contenders, thus ensuring the introduction of new genetic material into the pride gene pool. The new leaders may kill and eat the cubs of other males. The impact of this seems to bring the females into heat again and soon produce cubs from the new dominant males.

The mating behaviour of lions is a painful process for the female. The penis is barbed and its withdrawal hurts the female who may twist around and attack the dismounting male. The pain is necessary for feline mating as it is the shock to her system that induces ovulation and permits fertilization. Lionesses have a gestation period of three and a half months (about 108 days). Lions live up to about 18 years old in the wild.

Lions have long been killed in rituals of bravery, as hunting trophies and for their medicinal and magical powers. Although lions are now protected in many parts of Africa, they were once considered to be stock-raiding vermin and were killed on sight. In some areas, livestock predation remains a severe problem. Lions are found in all the major Parks in Zambia; South Luangwa, Kafue, North Luangwa, and Lower Zambezi.

When the wildlife visit 🦒 Repost from @royalliv

Repost @marulalodge This family is one of our bes

This time of year is a fantastic time to watch the