Elegant Shumba, named after the prides of lion seen in the area, is found on a wooded island in the centre of the Busanga Plains. The vast mosaic of grassy seasonal floodplains extending to the horizon, and mist rising at sunrise, epitomises the wild Busanga Plains. Its diversity can be discovered on game drives, as well as boating early in the season. Home to hundreds of red lechwe, puku, other plains game, and their predators – the remote floodplains seemingly go on forever.

Accommodation: Standing sentry over these endless plains with breathtaking views are six stylish tents, raised on wooden platforms, on a verdant tree island. Shumba’s six elegant tents offer a tranquil space from which to observe the wilderness – spacious living with a cushion-strewn veranda for outdoor contemplations. Enjoy Zambian hospitality in the main area, where sumptuous dining, cooling off in the pool and shaded relaxation are the order of the day, while convivial fireside tales and stargazing are a nightly ritual. 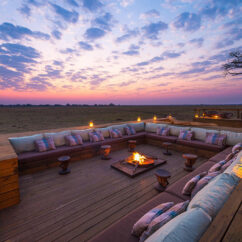 Wilderness began in Botswana in 1983, offering rustic mobile safaris to like-minded guests who were passionate about nature and exploring the country’s remote wildlife areas. It was also the first safari outfitter at the time to realise the need for its financial benefits to flow back to the country and its people, ultimately ensuring the sustainable protection of Botswana’s diverse wilderness.

Even though this approach forms the cornerstone of ecotourism all over the world today, it was a ground-breaking philosophy in the early 1980s that set Wilderness apart and marked its course for more than the next three-and-a-quarter decades. The company also began to offer specialist birding and photographic safaris that caught the interest of both the local and international travel trade, and the business began to grow.

In 1985, Wilderness extended its mobile safari offering to include tented camps set on exclusive wilderness sites. As a result, the lodge-operating side of the business was born and the first two tented camps opened in the Okavango Delta. In the 1990s, with renewed global focus on southern Africa as a luxury travel destination, the company began to extend its positive ecotourism footprint into Africa’s neighbouring countries – first Namibia, then South Africa, Malawi, and Zimbabwe, followed later by Zambia, Seychelles, Congo and Kenya.

In 2009, Wilderness began contemplating how its ecotourism model could contribute to the conservation of the Virunga Massif ecosystem and an iconic endangered species like the mountain gorilla. The launch of Bisate next to Rwanda’s Volcanoes National Park in June 2017 was a momentous occasion for Wilderness, as the company had truly demonstrated its ability to build sustainable conservation economies in Africa, using its brand of responsible ecotourism to make a real difference to both rural people and biodiversity conservation.

Today, Wilderness owns and operates over 40 camps/lodges and safaris in some of Africa’s best wildlife and wilderness areas; creating life-changing journeys in seven countries: Botswana, Kenya, Namibia, Rwanda, South Africa, Zambia and Zimbabwe. Its reputation and operating experience has enabled the company to successfully tender for prime leases in key wildlife areas, offering guests an unrivalled suite of camps/lodges and concessions in Africa, and, in turn, contributing materially to their ongoing conservation.

The company traverses nearly 2.3 million hectares (5.7 million acres) of prime wildlife and wilderness areas, covering parts of six of Africa’s 11 biomes (communities of flora and fauna). At the same time, Wilderness shares the benefits of ecotourism with local communities, partnering with them to ensure the future protection of Africa’s spectacular wildlife heritage.