Common in the bigger Parks, warthogs are usually seen in family groups or pairs. They feed on roots and grasses throughout the day and can often be seen on their front knees digging with the snout (not the tusks) to get at the roots of grasses and sedges. They farrow from June to October and have litters of about 3 – 5. They are named for the four large protrusions from the sides of the head, not warts at all, but apparently a fat reserve, and used in fighting and defense. Warthogs live in holes in the ground where the young stay until they’re big enough to walk with their parents in the open.

Males weigh 20 to 50 pounds more than females, but both are distinguished by disproportionately large heads and the warts, which are actually thick protective pads. Two large pairs of warts occur below the eyes, and usually only in males, a smaller pair nearer the jaw.

Sparse bristles cover the warthog’s body, although longer bristles form a mane from the top of the head down the spine to the middle of the back. Warthogs are gray or black (or yellowish or reddish, if the warthog has been wallowing in mud). The long tail ends with a tuft of bristles. The warthog characteristically carries its tail upright when it runs, the tuft waving like a tiny flag. As the young run in single file, the tail position may serve as a signal to keep them all together. Warthogs trot with a springy gait but they are known to run surprisingly fast. They can escape a lions burst at 55 kmph (35mph). 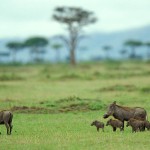 Warthogs live in family groups of one female and her young. Sometimes another female will join the group. Males normally live by themselves, only joining groups to mate. Warthogs engage in ritual fights in which they charge straight on, clashing heads when they meet. Fights between males can be violent and bloody.

Lions and leopards are the warthog’s chief enemies. Warthogs protect themselves from predators by fleeing or sliding backwards into a hole, thus being in a position to use their formidable tusks in defense.