The hyena is common in Luangwa and Kafue National Parks. They feed on carrion but are also hunters in their own right.

Bones left over at a kill are cracked open with their powerful jaws and consumed. Because of the high calcium content in these bones, hyena droppings are white, like chalk.

Spotted hyenas are organized into territorial clans of related individuals that defend their home ranges against intruding clans. The center of clan activity is the den, where the cubs are raised and individuals meet. The den is usually situated on high ground in the central part of the territory. Its above-ground entrances are connected to a series of underground tunnels. They live in holes in the ground where they breed, having one or two in a litter, the young looking like cute little brown puppies.

Their gestation period is three and half months and they can live up to forty years. Their drawn out laugh-like call can often be heard from the camps at night. They usually move at night but can be seen in the day. 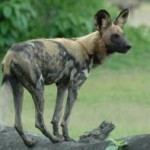 When a hyena’s tail is carried straight, for example, it signals attack. When it is held up and forward over the back, the hyena is extremely excited. In contrast, it hangs down when the hyena is standing or walking leisurely. If frightened, the hyena tucks its tail between the legs and flat against the belly and usually skulks away.

The powerful jaws and digestive tract of the hyena allow it to process and obtain nutrients from skin and bones. The only parts of prey not fully digested are hair, horns and hooves, these are regurgitated in the form of pellets.

Among the species that prey on hyenas are lions, who will attack them at every opportunity, hunting dogs and other hyenas.