Hippos are plentiful in Zambia’s many waterways and often groups of over 60 can be seen in one spot, especially along the Luangwa River where the official count is 48 per kilometre of river.

They are vegetarian animals, feeding mainly at night and returning to lounge in the water before sunrise. They pluck grass with their wide lips but are also known to eat the fruit and flowers of the sausage tree. They consume up to 60kg of grass every night.

A calf is suckled on land and then in the water and begins to graze at four to six months. It reaches maturity at four years and has a life span of about forty years. In areas where overcrowding is intense, aggression increases. They have a strict territorial system within which bulls are continually fighting for dominance. Their large tusks are used as weapons of attack or defense.

The hippopotamus back is a purplish grey-brown, with the undersides pinkish. There are patches of pink on the face, especially around the eyes, ears, and cheeks. The hide is virtually hairless, and is moistened by mucous glands which secrete a reddish liquid. The body is bulky and barrel-like, and is supported by stubby legs. 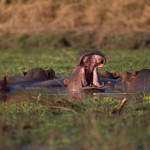 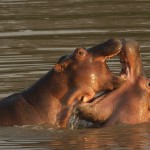 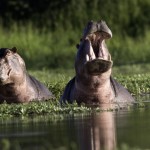 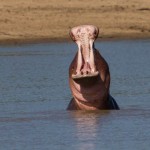 The large, wide head has the eyes, nostrils and ears set on the top, allowing them to remain above water while the hippo is submerged. The mouth is widely split and can be opened extremely wide, exposing the canines, which are large and curved.

The hippopotamus spends most of the day wallowing, resting, and swimming in or near water. At night, they emerge from the water to graze. Hippos will graze about 3 kilometers / 1.8 miles from water, although some individuals move farther inland. An individual may walk 10 kilometers / 6 miles to seek food on land, spending an average of 5-6 hours on land per night.

Despite their bulk, they can run extremely fast. The river hippo’s daily consumption is 1-1.5 percent of its body weight, compared to an average of 2.5 percent for most other ungulates. Hippos swim and dive well, and their specific gravity allows them to walk along the bottom. When submerged, they can seal off their slit-like nostrils and ears. The shape of their head is muck like that of a frog, and allows them to keep their eyes and nostrils above the surface, while keeping the rest of their body submerged. Hippopotamuses usually remain submerged for 3-5 minutes, though they can stay below for up to 30 minutes.

Population densities vary, and can be as great as 31 animals per square kilometer. Adult males defend narrow territories which consist of water and the adjacent land. Both sexes are very aggressive – males defending their territory may kill another hippo nearby when courting females, and females join together to protect their offspring. The hippos major weapon is the set of large, sharp lower canines which, in males, may grow to 0.5 m / 1.5 feet long. The main vocalizations are a “wheeze-honk” and a roar.

Hippos are plentiful in most of Zambia’s rivers and lakes especially in South Luangwa National Park and Lower Zambezi National Park.