An elephant’s social life is organised around a family unit, which consists of an adult female and her offspring, and two or more closely related females and their offspring. Bulls leave the family unit at puberty when they are about 16 years old and join bachelor groups or move about alone.

The best guide for determining sex is to look at their head profiles; males have a rounded head and females a squarer head.

At birth, an elephant calf weighs 118kg (260 pounds) and is able to walk under its mothers belly for the first year. Elephants spend 16-18 hours a day grazing and browsing, from ground level to 18 feet or more into trees, when standing on their hind legs and stretching out their long trunks. They also use their trunks to squirt water into their mouths at seven litres a sip! In a full drinking session elephants take up to 50 litres of water.

The flapping action of their ears when charging is thought to be merely a cooling action as the stress of the moment causes them to become overheated. The advantage of this is that it helps them to look even more fearsome to their enemies. Elephants are unfortunately very destructive feeders and often large trees are pushed over and only a few leaves eaten from the top. If too many are confined to a small area, massive damage and deforestation can and does indeed occur, especially in the Luangwa Valley. 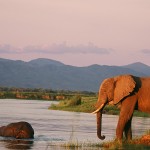 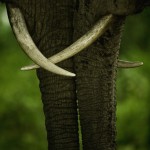 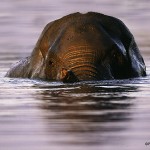 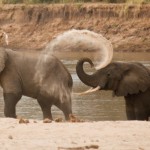 Of all its specialized features, the muscular trunk is the most remarkable; it serves as a nose, a hand, an extra foot, a signaling device and a tool for gathering food, siphoning water, dusting, digging and a variety of other functions. Not only does the long trunk permit the elephant to reach as high as 23 feet, but it can also perform movements as delicate as picking berries or caressing a companion. It is capable, too, of powerful twisting and coiling movements used for tearing down trees or fighting.

The tusks, another remarkable feature, are greatly elongated incisors (elephants have no canine teeth). About one-third of the total length of their tusks lie hidden inside the skull. The largest tusk ever recorded weighed 214 pounds and was 138 inches long. Tusks of this size are not found on elephants in Africa today, as over the years hunters and poachers have taken animals with the largest tusks. Because tusk size is an inherited characteristic, it is rare to find one now that would weigh more than 100 pounds.

Elephants are generally gregarious and form small family groups consisting of an older matriarch and three or four offspring, along with their young. It was once thought that family groups were led by old bull elephants, but these males are most often solitary. The female family groups are often visited by mature males checking for females in estrus. Several interrelated family groups may inhabit an area and know each other well. When they meet at watering holes and feeding places, they greet each other affectionately.

Smell is the most highly developed sense. They sound deep growling or rumbling noises as the principle means of communication. Some researchers think that each individual has its signature growl by which it can be distinguished. Sometimes elephants communicate with an ear-splitting blast when in danger or alarmed, causing others to form a protective circle around the younger members of the family group. Elephants make low-frequency calls, many of which, though loud, are too low for humans to hear. These sounds allow elephants to communicate with one another at distances of five or six miles.