These cattle-like ungulates have massive, low sweeping horns and move in small to very large herds, often over 400 strong, especially in the Kafue and South Luangwa National Parks. There are also smaller bachelor herds of four to five. Occasionally solitary ones known as ‘kakuli’ live completely alone and do not associate with the breeding herds. During the dry season they are the preferred prey of lion. They can sometimes be seen wallowing in mud pools which is essentially a cleansing technique that rids them of skin parasites and provides them with a caked mud barrier against further insect attack.

If attacked, the adults in the herd form a circle around the young and face outward. By lowering their heads and presenting a solid barrier of sharp horns, it is difficult for predators to seize a calf. This effective group defense even allows blind and crippled members of the herd to survive. Thus predators do not have a major impact on buffalo herds; it is the old, solitary-living males that are most likely to be taken by lions. 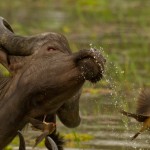 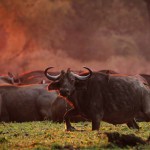 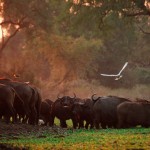 Outside the National Parks in East Africa, buffaloes frequently come into conflict with human interests. They break fences and raid cultivated crops and may spread bovine diseases to domestic stock. They are still numerous in many parts of East Africa, even though they have been periodically devastated by the rinderpest virus. In other areas of Africa, buffaloes have been eliminated or their numbers greatly reduced.

Sight and hearing are both rather poor, but scent is well developed in buffaloes. Although quiet for the most part, the animals do communicate. In mating seasons they grunt and emit hoarse bellows. A calf in danger will bellow mournfully, bringing herd members running at a gallop to defend it.